Earlier this past week, Los Angeles Rams DT Aaron Donald hit a Bengals player with his own helmet, during practice. This situation is very reminiscent of the Myles Garrett/Mason Rudolph incident back in 2019. The only difference is the NFL is silent and has yet to do anything regarding Donald and his actions. When Browns DE Myles Garrett has his helmet incident in 2019, the NFL suspended him indefinitely, leading to him missing the rest of the 2019 season. As for Donald, the NFL has not done anything and there are no speculations of there even being a suspension for Donald. 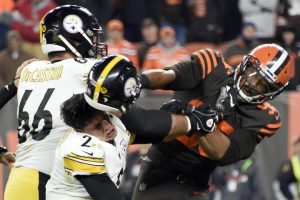 The NFL must do a better job at disciplining players in fair action and they once again fail at this. Because it was practice and Donald plays for the Rams is the reason why I think he has not been punished. If Aaron Donald played for the Cleveland Browns, he would have already been suspended for at least a season. The NFL has been a biased league for at least the past three decades. It’s preposterous the types of things certain players and certain teams can get away with.

If there is an in-game violation with a player, they will be punished. If there is an off-the-field issue with an NFL player, they are punished. Somehow with an incident happening at practice, there is no punishment? I do not mean to be critical, but the NFL needs to fix this issue. Aaron Donald did the same, if not worse, to a Bengals player at practice similar to the Myles Garrett incident. But of course, they will not punish Donald because it was during a practice session and no one even saw it on TV.

As a Browns fan, watching Myles get punished hurt the Browns 2019 season. Did it suck? Of course, it did. But it was fair that he needed to be suspended. I say the same for Aaron Donald, he needs to be suspended for his actions. The NFL needs to follow a fair rule that applies to all players for incidents like these. This is a problem the NFL needs to fix, but in the end, they enjoy having biased opinions.