The Buckeyes Sneak In 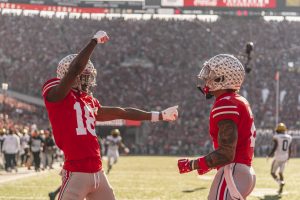 Eight days after a bitter blow out loss to the Michigan Wolverines at home, Ohio State is now the 4 seed in the College Football Playoffs. The Buckeyes needed a bit of chaos to return to the discussion, and that is exactly what happened. On Friday night, Utah dominated USC 47-24 in the PAC-12 Championship, giving USC their second loss of the season. At that point it seemed like a lock for the Buckeyes to return into the top 4.

As the No. 4 seed in this year’s College Football Playoff, the Buckeyes are set to face No. 1 and the defending National Champions, Georgia in the CFP semifinals. The teams will battle on Dec. 31 at 8 p.m. in the Peach Bowl at Mercedes-Benz Stadium in Atlanta.

Entering the CFP, Georgia ranks No. 7 in total offense and No. 13 in scoring offense with 491.9 yards gained and 39.2 points scored per game. It’s ranked No. 9 and No. 2 nationally in the same categories defensively, allowing 292.0 yards and 12.8 points per contest to its opponents.

“Life is all about opportunity, and what an unbelievable opportunity this is. Going down to Atlanta, playing the national champs,” Day said on ESPN. “Kirby’s done an unbelievable job again this year. But this is all gonna be about taking advantage of this opportunity, who works harder over the next month. The coaches, the players, just maximizing every day, practicing really well and preparing to play in this game. Because now we’re back in control of our destiny. We weren’t, and that was the hardest thing going into this past weekend. But now we’re back in control of our destiny.”

“Hard to explain the range of emotions that have gone on here over the last seven days. But we saw our name up there on the board and know that we’re gonna have an opportunity to play. I said it before, it’s like a second lease on life,” Day said. “A couple days ago we were on life support a little bit, our season was. And now there’s there’s a two-game season ahead of us. And so there’s unbelievable excitement right now, guys, were just bouncing around the facility. We had a team meeting right before that, and there’s a lot of excitement right now.”

“I think our guys after kind of having things taken away over the last week and feeling like our season was on life support, now there’s life back into us,” Day said. “And there’s a new perspective going into this preparation.”

“I’m excited,” Smart said of the semifinals matchup. “What a great program. What a great job Ryan has done there. I got a lot of really good players because we recruit a lot of the same kids. They’ve got a tremendous program. It’ll be a premier matchup, which our guys love. When you make the final four, whether you’re one through four, it really doesn’t matter. What matters is how you manage this time building up to this game and the nature of the game because there is a lot of buildup.”

“It’s not about the Big Ten and the SEC. It’s about football,” Smart said. “It all down the line of scrimmage. It boils down to turnovers and explosive plays. It’s not really about the two conferences in those games.”

“It’s about who plays better. Because I also coached at Alabama when Ohio State absolutely destroyed us in the CFP semifinal game, and, you know what, they played better,” Smart said. “They were more explosive and didn’t have turnovers, but we did at Alabama. So it really boils down to how you play, not who you play.”

Ohio State finds itself in a position that they are rarely in. As underdog’s against the undefeated reigning champs, the Buckeyes hope to conjure a similar ending to their 2014 champaign. There is no question that Ohio State remains one of the most talented teams in all of College Football, but the Buckeye’s most improve their mistakes from their last game if they hope to beat Georgia, and possibly rematch against their bitter rival in the National Championship.