Like many of you, I’d been anticipating this Cleveland Browns versus Kansas City Chiefs game for months. I even started a countdown to the big game that I’d posted on social media platforms over the last three months. Last May I purchased my game day tickets and was excited to be heading back to Kansas City, a place I knew some since I’d lived down in Wichita, Kansas for 26 years in the past.

I flew out to Kansas City this past Saturday and was excited to be going to the game along with one of my cousins who was coming up from Wichita, where he lived. I was staying out near the Kansas City airport. There are dozens of other hotels right in the same vicinity. I happened to be staying at a Hampton Inn, a nice hotel, but nothing to write home about.

So Sunday morning, when I went to the hotel’s customary breakfast that served those standard items like the small boxes of cereal and had your microwavable breakfast sandwiches available  I wasn’t prepared to run into Cleveland’s legendary sportswriter Terry Pluto. Pluto has been in the Northeastern Ohio market since the 1970s and has written Cleveland sports masterpieces such as False Start: How the New Browns were Set Up o Fail and Glory Days in Tribe Town

So when I recognized him on this early Sunday morning several hours prior to the Browns kickoff with the Chiefs, my trip to Kansas City was made. It’s not often we get to bump into celebrities and those people we read about or see on television.

I tell people the story of when I met the great Michael Jordan, the Chicago Bulls legend when he was in his first or second season with the Bulls. I’d been at Chicago O’Hare airport and Jordan and his teammates were boarding a flight. Back then professional teams traveled on regular flights with the general public. So I got Jordan’s autograph, but have since lost it. I’m still kicking myself for that blunder.

Back to meeting Terry Pluto. It was a great moment where I introduced myself to him as he was there with family as well. He was very kind and gracious throughout our ten-minute chat. We talked a little Browns. I asked him about his thoughts on the Browns coach Kevin Stefanski. He was very much sold on our coach as am I that even if the Browns were to lose to the Chiefs (which the Browns did) the Browns would be there winning games the rest of the season.

At the end of our chat, Pluto was kind enough to snap a photo with me. That photo will be going up on the wall in my new Cleveland sports loft area in our condo. 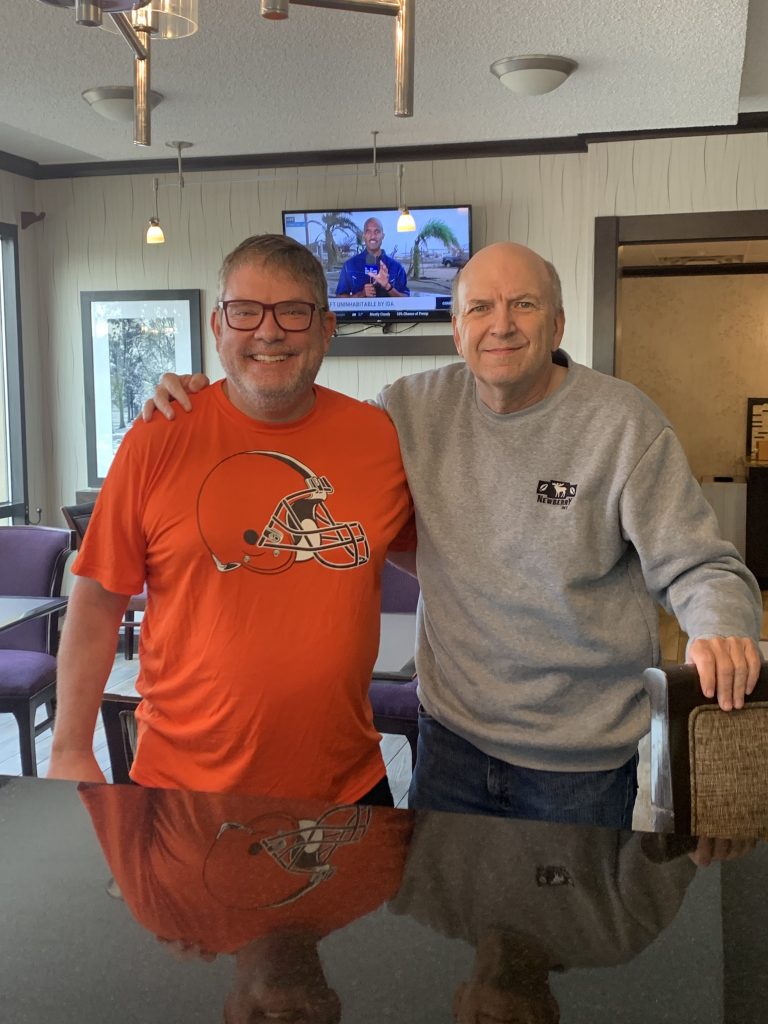 Having this chance encounter are those types of things in our lives that just remind us of all of our values, our dreams and the goals that we have over the course of a lifetime. For years I’ve read Terry Pluto’s articles almost like a religion because I’ve valued his opinion and can relate to his thinking on various Cleveland sports topics. These types of moments remind me too how we are all just people and we all have lives and families.  And though I don’t play a sport or am on the news nightly or star in the movies, doesn’t separate us from that importance of connecting as people. I’ll always remember the day I met Terry Pluto.

The rest of the day as a Browns fan was tough as we went through the ups and downs of the big game. In the end, the Browns lost another heartbreaker but I’m reassured by that message Pluto shared with me that the Browns this season would just be fine even if this game were lost.

I look forward to maybe bumping into Terry Pluto again in the future but if not it was an honor to meet you.