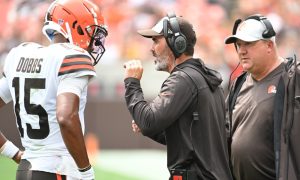 Cleveland Browns HC Kevin Stefanski must show up as the head coach for this game. He cannot overthink what offensive play to call and needs to just ‘run the ball’. Kevin Stefanski, overall, has really good time management with the clock. If he can get the Browns to play calm, cool, collected football, then they will win this game. The Browns are a team that dominates the opponent by taking log drives to score touchdowns. This allows the Browns to wear out their opponent on defense.

Stefanski should NOT go for it on 4th down when he can clearly send the field goal unit out to grab three points. There is a reason the Browns drafted K Cade York. We drafted him to kick field goals, not to sit on the sidelines as our offense loses yards on a 4th and one play.

Kevin Stefanski needs to show charisma and get the Browns back to where they once were. If he coaches the way he did against the Bengals two weeks ago, the Browns have a major chance of winning this game.

So, let’s see. Will we get the good Stefanski, the back Stefanski, or the ugly Stefanski? Find out this next Sunday!