Number 2: The NFL’s Handling of This Was Horrific 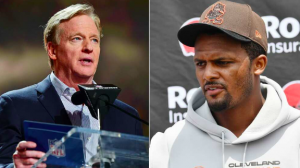 From hiring a judge to come up with an original suspension in Sue L. Robinson. Then taking her six-game recommendation and negating it just to make a different punishment is unfair to the Browns, Watson and Judge Robinson herself.

The league obviously did not like the six-game punishment and wanted something more severe. Why hire someone if you aren’t going to even listen to her recommendation?