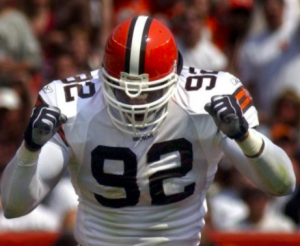 What hurts the most about this one, is being an Ohio State fan. Defensive end and No. 1 overall pick in 2000, Courtney Brown, absolutely dominated college football. The guy was a freak that couldn’t be stopped no matter how many guys you put on him.

Then he came to the NFL and became average very quickly. After an average rookie year, Brown then struggled to stay on the field and had little to no production when he was on the field. In four years with the Browns, he had 17 sacks, but the expectations were so much higher.

Brown was a part of the trade where the Browns and Broncos basically swapped defensive lines and lasted only one more season in the NFL.