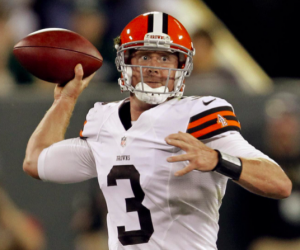 A pick no one was excited about from the beginning was 28-year-old rookie quarterback, Brandon Weeden. I think because he looked like Andy Dalton, some thought he could be like him.

Weeden was able to bounce around the league after Cleveland, but never as anything more than a backup. He has had five additional starts since 2013 and won just one of those.