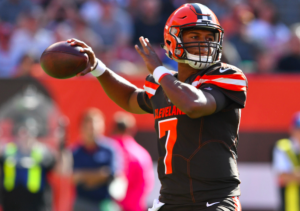 Another one-and-done quarterback for the Cleveland Browns was DeShone Kizer, the second-round pick from Notre Dame. After putting on a show in the preseason, it became apparent quickly the vanilla defenses from then weren’t the same in the regular season.

Kizer led the Browns to 0-15 that season and threw a league-leading 22 interceptions. Many believed that Kizer got the short end of the stick, but Packers fans quickly found out how bad he was in 2018.

I’m not sure how this guy had so much success in college, because he was as bad a quarterback as I can remember the Browns having, and trust me, there have been some bad ones.