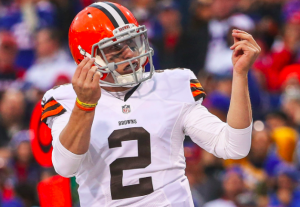 Is there a Cleveland Browns list of awful players that doesn’t include Johnny Manziel? A guy that screwed up the one thing the Browns did right (draft pick the team got for Richardson).

It was a very 50/50 crowd on Manziel from the beginning. You either loved him or hated him. And by the end, everyone hated him.

In two seasons Manziel had eight starts and did end up winning two of those games. His NFL career ended with 1,675 yards passing, 7 touchdowns, and 7 interceptions. And unfortunately, his legacy will be more of all the stupid things he did and said off the field, vs. what he did on the field.

Props to Manziel though.

The guy had one big win at home vs. Alabama and made enough money for him to party for at least six months. Manziel has since been entering and gimmick football league every invented. He claims it’s to get back to the NFL, but everyone knows the guy just needs some money.