The Cleveland Browns have added a ton of talent as of late, but we can’t forget these ten guys who belong in the Hall of Shame. *This article is via Fansided and the author, Greg Newland, has approved usage of it on CST’s site!*

As of late, the Cleveland Browns have not only drafted well, but they have also added a ton of talent in free agency. It’s hard to remember that just a few years ago, the Browns completed the perfect 0-16 season, and now many consider them Super Bowl contenders.

As of late things have been great, but since the Browns returned in 1999 there has also been plenty of bad. Guys were brought in to turn around the organization that failed to live up to expectations.

No general manager will be perfect, but the Browns seemed to miss a lot in the last 20 years. Here are 10 guys that should be in the team’s Hall of Shame. I know I missed some good ones, so please remind me in the comments. 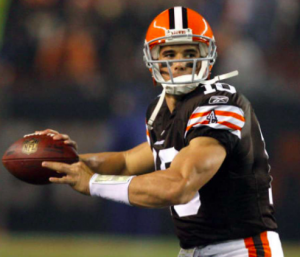 Brady Quinn was one of the first quarterbacks that brought some real excitement to fans back in 2007. Quinn was the no. 22 pick out of Notre Dame and was considered a slide on draft night.

In three seasons with the Browns, Quinn only started 12 games going 3-9 as the starter. Not only were the Browns bad during that time period, but Quinn was also even worse. While 2007 was a better year, in 2008 and 2009 when the Browns won just 9 games total, Quinn couldn’t beat out guys like Derek Anderson, Ken Dorsey, and Bruce Gradkowski to get on the field.

After leaving the Browns in 2009, Quinn would get one more shot in 2012 with Kansas City where he would go 1-7. Don’t worry, Brady is doing just fine in broadcasting.